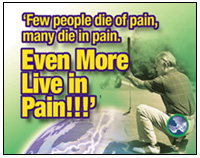 Pain, particularly chronic pain, is a major threat to the quality of life worldwide, and will become more so as the average age increases. The burden of unrelieved pain is also major problem for health services throughout the world. In many parts of the world the epidemic of 'killer diseases' produces enormous amounts of pain for which there is little or no pain relief. This is especially true not only for patients with cancer and HIV/AIDS but also for the millions of people suffering injuries from road accidents, violence, acts of war, childbirth and even after surgery. Epidemiological surveys show that unrelieved pain has a major socioeconomic impact on the individual sufferer, health care providers and employers. 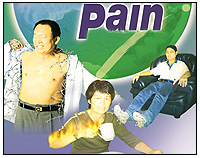 For many years pain, the most common symptom that a patient comes to a doctor with was not well understood. However, over the last three decades, there has been a tremendous advances in our understanding of the basic mechanisms of pain and in the ways in which we can relieve it. The control of pain has been a relatively neglected area of concern despite the fact that cost effective methods of pain relief are available.

The major barriers to more effective pain relief are:

The International Association for the Study of Pain (IASP) is an organization that was founded about 30 years ago with the primary objective of improving our understanding of pain and to find the means to control it. IASP felt that the time was right to raise the profile of pain.

The GLOBAL DAY AGAINST PAIN (GDAP) was launched in Geneva on October 11th 2004, as a joint venture between the IASP and the European Federation of IASP Chapters (EFIC) and co-sponsored by the World Health Organization (WHO). This idea had its roots in the success of EFICs European Week Against Pain which had been held every year since 2001. It was in effect the beginning of a Global Campaign Against Pain. All National Pain Societies, who are chapter members of IASP were encouraged to organize events in their own countries, such as press conferences, public forums and radio talks etc to help raise awareness among health care providers and the public about pain management in general and to break down some of the barriers mentioned above.

One of the significant points that has been consistently highlighted was EFICs Declaration: Chronic pain is a major healthcare problem that the time was right to promote the recognition that the consequence of chronic pain is a disease entity in its own right This declaration was presented to and received by the European Parliament in 2001. i.e.. It has been widely circulated and is available in several languages at www.efic.org

Innovation in Pain Research and Treatment

Pain the Quality of Life

The WHOs co-sponsorship was a major accomplishment and was an important factor in the high impact that GDAP received. In an official WHO press release, the headline read:

Another key issue that was highlighted by GDAP was Pain Relief should be a Human Right It needs to be emphasized, however, that this means, those suffering from unrelieved pain have the right to receive pain treatment, and optimal management of their pain. No one of course can demand a right to be freedom from pain. That is not attainable.

The positive feedback from the first GDAP last year has encouraged IASP to have another one this year. The first Global Day Against Pain in 2004, focused attention on the worldwide under-treatment of acute and chronic pain in general. It also called for pain control to be recognized as a major health issue. This year, IASP Global Day Against Pain in Childhood on October 17, 2005 will focus upon childrens pain. There is an urgent need to improve childrens pain treatment, both for humanitarian and ethical reasons and because pain affects not only childrens health but potentially may contribute to their disability and suffering later in life.

The United Nations Convention on Rights of the Child recognizes that children are a vulnerable segment of the population and are entitled to special consideration in all respects, including health care. Despite this recognition, inadequate prevention and relief of childrens pain is still widespread. This failure reflects shortcomings in recognizing childrens ability to perceive, respond to and be harmed by pain; exaggerated fears of side effects of analgesic in children; the lack of resources to provide training for clinicians and treatment for children.